A Spider, A Robot, and A Dragon Walk Into A Bar…

[I realised that the play I saw a few weeks back would make great review-writing practice, hence the delay between viewing and posting.]

Four lucky writers had the chance to see their concepts workshopped into brief plays in Telling Tales, the collection of vignettes put on by a fantastic cast at The Berry Theatre in Hedge End. It was a one-off show displaying the results of a month of hard work on the parts of writers, techs, and actors. It was the culmination of a contest to invent new fairy tales for a modern world.

The directors heading up the production were Lewis Mullins, Lily Coull, and Daniel Hill. Music was arranged by David Lewington, Holly Scott was the production assistant, and Shaun Hobbs and Jack Anderson served as technicians.

Nine talented young actors brought the writers’ characters to life, often wearing multiple hats as the play transitioned from one vignette to the next. The intended audience was supposed to be children, but I saw no reason why that couldn’t be interpreted as  kids from ages one to one hundred!

The set design was wonderfully simplistic and whimsical. Its roughshod, carefully strewn chaos filled the stage without filling it, calling to mind the more minimalist spreads of Marzolo and Wick’s I Spy picture book series. The main colour scheme was very cool, teals and greens, and there were books supplied by Oxfam hanging from above, giving the appearance of them floating. Towards the wings were piles of crumpled up pages and stacks of books and other miscellaneous debris. I felt this really spoke to the trial-and-error process of writing.

The opening scene is a delight, immediately captivating the audience. It is a flurry of motion as the actors flitted around, grabbing books and leafing through them before showing them to their colleagues. It was a perfection introduction, as it embodied every time I got excited about a book and couldn’t wait to talk to my friends about it. The way they captured the passion of reading in such a simple, easy to first fashion was remarkable.

I also have to give props to the tech team for including Electric Light Orchestra’s “Mr. Blue Sky” in the play’s soundtrack.  I have such a soft spot in my heart for that song and it’s one of those that can instantly brighten any mood my brain  can throw at it.

The literature handed out before the show was simple but effective, and included one essential tool for getting through the lull before the show and the car ride home: a cootie catcher!

A what? Well, some people might know them as Fortune Tellers, or even just that thing from that one episode of South Park… 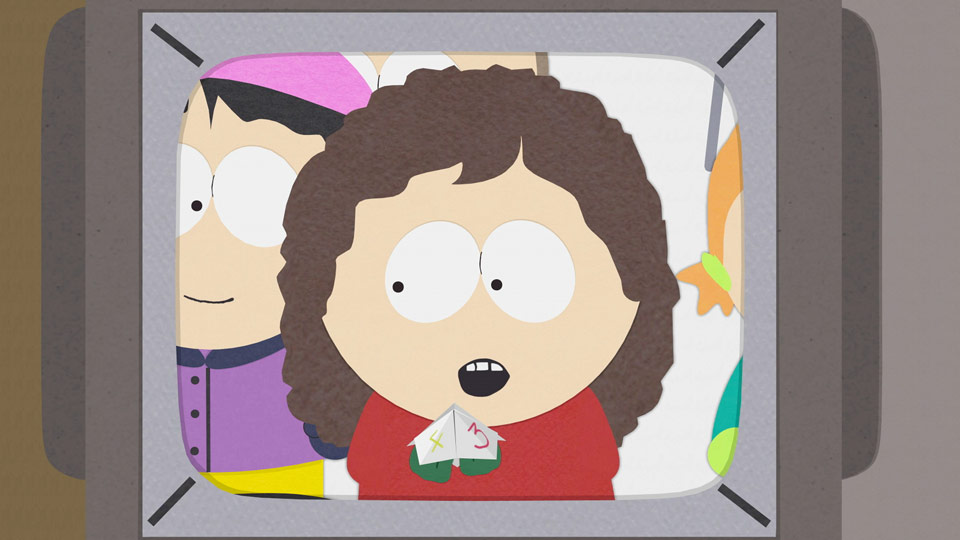 But I grew up hearing them called cootie catchers because kids are as weird as they are expensive. And the program came with one! It was themed, with symbols and snippets from the different stories being told. A great way for kids to remember what they saw and to give them a fun souvenir as well! 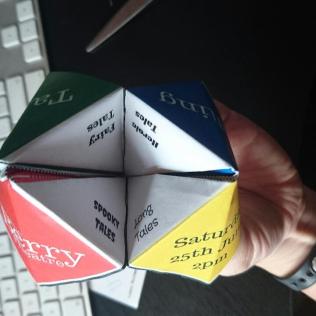 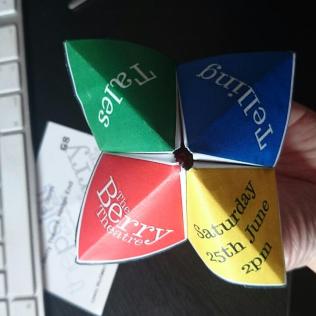 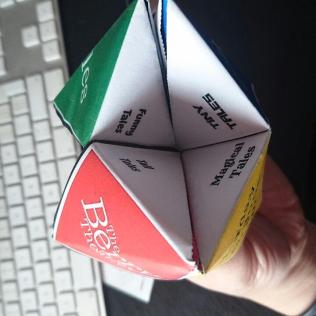 This was in addition to a page with the crew credits and a blurb about each story and its author.

Speaking of the individual stories…it’s about time we got to the meat and potatoes of the play!

In this short story based on a game the author used to play with her children, a young girl tries to hide a dragon that eats colours in her room.

It is a dialogue-lite piece that very effectively uses the simplistic set design and benefits from the very enthusiastic and animated performances of the cast. The concept is fresh and original and would translate into a wonderful picture or colouring book to teach children about different colours.

Memorable line: “I will miss you, despite all your chaos.”

In the next piece, a scientist builds a robot designed to count all life in the world,  and is then sent out to perform its task. The robot meets an eclectic variety of characters, such as an ornery frog, a volcano, and a fussy hen.

The dialogue is very witty and engaging, and as this was performed two days after the EU referendum, was eerily relevant in revealing the scientist had run out of funding due to a sudden financial crisis.

This piece teaches some very valuable lessons about challenging assumptions and putting people into boxes based on a limited understanding of their existence. A fantastic way to approach dialogues with children about bigotry they may encounter in the world.

Memorable line: “We both breathe air!” “That would make us breath-ren, right?”

Little Ava and the Spider

This story shows a young girl who tries to stay up all night to watch the stars. She believes this will keep them from disappearing with the dawn. A spider in her room tells her stories to make her sleepy.

Ultimately, we come to realise this need to ensure the stars don’t leave is her way of grieving, as she is told by the spider that everything needs an end. It is a story of accepting the loss of death, and whilst materials to help children and their parents grapple with such a hefty issue are greatly needed, it became an awful lot to unpack in the course of a fifteen minute mini-play.

Memorable Line: “I’m going to watch the stars to make sure they don’t go away.”

The Door To Nowhere

The finale to Telling Tales was about a young girl living with her aunt. She discovers a secret door, and when she confronts her aunt about it, her aunt reveals the key, which was a gift from her parents. She goes through the door, and finds herself in an altogether different world that she must navigate.

The second half, after she passes through the door, was visually stunning, and given the prep time and budget involved pulled off some truly astounding effects. It also gave us a strong, female protagonist and good dialogue starters about gender roles. On the down side, the music volume was occasionally too loud to actually hear the dialogue, which could have been a particular problem for young children, whose hearing is generally more sensitive.

Overall, I felt that this was a wonderful afternoon’s entertainment for children of all ages(including those that have children of their own!), and brilliantly executed. The addition of the fortune teller supplement to keep fidgety hands busy gives attendees a souvenir to keep the stories fresh in their minds and serve as a momento. I would highly recommend seeing it, except for the fact that it was a one-time showing!